Title: Masquerade With A Marquess

Sophia di Contini risks her life to sail to England alone and slip into the homes of those she suspects stole priceless treasures from her family during the wars. Discovered by Victor Cameron, she agrees to search for her art his way even though she’ll live in his house, yearn for his touch, pine for his kisses….

Five years ago, Victor had to give up Sophia. Now he vows to keep her near him and to protect her from men who would destroy her. He’ll help her find her precious art even if he risks the chance she’ll steal his heart away…again.

I tried so hard to like this book. I am generally a sucker for historical romances, particularly from the Regency era, but regardless of how may times I picked up and set down this book, I just couldn’t get into it.

Technically speaking, the book was well written. I didn’t run into obvious typos, illogical behavior, or grammatical mistakes. The pacing, however, was extremely slow, even tedious at times. It seemed as if the book focused less on the romance aspect of the plot, and instead spent more time on the historical aspect of the time period. The narrative slogged through the complexities of the dialogue and character thought processes—often focusing entirely on the intrigue of the art theft and little else. At 50% into the story, almost nothing of significance outside of small talk between the characters seemed to happen and there came a point when I picked up my Kindle, read a paragraph, and said, “That’s it. I can’t continue reading this. I’m bored.”

And I was. So incredibly bored.

This isn’t the type of book I’d normally DNF. As I’ve said, historical romance is one of my favorite genres to read; I usually know that no matter the content of the book, I’m going to fall in love with it.

I didn’t love this.

I’m sure there will be people out there who eat this story up with a spoon. It is a story of passion, intrigue, and drama… but it just wasn’t for me. I expected a little more romance, a little less intrigue than what I got. 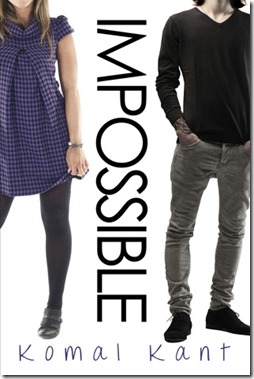 Title: Impossible [With Me 1]

Ashton Summers is on her way to becoming the most popular girl in school and nothing—or no one—is going to stand in her way. Especially not Luca Byron, her freak neighbor, with his tattoos, loud music, and distracting green eyes.

Luca Byron has three goals in life: get through high school with a low profile, make sure his garage band becomes something more than a hobby, and try to forget about his insufferable ex-best friend, Ashton, who he can’t get out of his mind.

The last thing Ashton and Luca want to do is rekindle their friendship, but when Ashton takes a tumble down the social ladder, Luca—with his new makeover—is the only one who can help her rise up again by pretending to be her boyfriend. At first, being together is unbearable and annoying, but things start to change as Ashton and Luca discover the real reasons they drifted apart seven years ago.
Now, keeping their hands off each other seems impossible.

To be honest, this was a cute book, and a fast read. Technically speaking, the writing was clean, easy to follow, grammatically correct (with the exception of one missed word I found), and never made me feel that it was dragging, or being rushed. I liked it.  This was your typical teen romance story where the main characters made a lot of stupid, impulsive mistakes, and spent the book sorting out their drama-filled issues.

However, despite the appeal of the narrative from a technical standpoint, or how adorable the love story was, there were certainly some issues that cropped up that made me rate this at 3 stars rather than a 4 or 5. The biggest problem I had with this story was that it was horrendously cliché. Watch any teen romance movie, and you’ve practically read this story; Boy and Girl from two different clique’s, living next to each other, used to be best friends, start to fall in love after years of estrangement—after having come to an agreement that they would pretend to be boyfriend/girlfriend for awhile… thus saving one teen’s reputation, and preventing the other from a messier, more clingy relationship. Don’t forget the date-raping jock. We’ve all heard this story. It’s old, and used, and left nothing to surprise me. It even has one of those moments where the guy in a rock band hops down off the stage to sing to the girl he loves at the end. (Sorry, spoilers.. but if you haven’t seen this a million times before in other teen romances… shame on you.)

To make matters worse, the characters have ridiculous trendy names (like Ashton, Blaze, Kance, and Luca… Ashton is a girl by the way, I know, it threw me off too), and there are almost no redeeming qualities about the main female lead at all. She’s snobby, mean-spirited, and a bully. Luca, the male lead isn’t much better… he may be a teen, but he’s already been sleeping with a ton of girls, and seems to be your typical emo stereotype, complete with eyeliner and tattoos. Le sigh.

The story that ensues is a predictable mish-mosh of over dramatic teen angst that comes off as a little too familiar to be comfortable. Did I like it? Yah. It was an all right story. It was cute, as I said… but it certainly wasn’t genre-breaking. To be frank, the two main characters were both written like girls, and had a very similar voice, with the exception that Luca’s head seemed to constantly be sizing up how “hot” Ashton was in one form or another (okay, maybe Ashton did the same to Luca…). They didn’t seem real to me, but instead, like the plot, stereotypes of a very narrow view of teenage girls/boys. I wish the author had spent more time filling out these characters, and perhaps, finding a more original plot.

Would I recommend it? Sure. It’s 99 cents on Amazon right now, and to be fair, it is an adorable story. If you like teen romance stories, you’ll be comfortable with this one. It’s cute. Just don’t expect to get anything spectacular out of it, you’ve probably read it before. 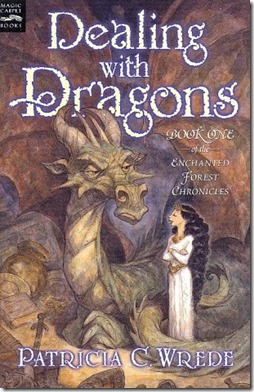 Take one bored princess. Maker her the seventh daughter in a very proper royal family. Have her run away.

Princess Cimorene has never met anyone (or anything) like the dragon Kazul. But then, she’s never met a witch, a jinn, a death-dealing talking bird, or a stone prince either.

Princess Cimorene ran away to find some excitement.

I’ve done something I haven’t done in a very long time. I read a middle-grade book. More importantly: I thoroughly enjoyed a middle-grade book. I first stumbled upon this series about 18 years ago, when I was 12. It was one of the first fantasy books I ever picked up in middle-school, and it left enough of an impression that many years later, as an adult, I was willing to pick it back up. Surprisingly, I had loved the book so much all those years ago, that I still remembered almost the entire plot.

Dealing with Dragons at it’s heart is a story about the Princess Cimorene. She’s the youngest of seven daughters, and the only one who detests being a princess. She’d like nothing more than to do something exciting with her life—and she tries. She takes fencing lessons, cooking lessons, even learns foreign languages for fun, but her plans are always put to a stop by her over-bearing parents, and when they start to arrange her marriage for her, she decides enough is enough. Cimorene runs away and throws everything to the wind, giving up her life of riches and nobility to become a dragon’s maid.

What ensues is a hilarious romp through Middle-grade fantasy with an empowered princess who isn’t going to let anyone tell her what to do with her life anymore. In the process she makes friends like the dragon Kazul, Alianora the neighboring captured princess, a stone prince,  and Morwen the witch. She fights a dastardly wizard, fends off enamored knights and princes intent on “rescuing her”, and has the adventure of her life.

This book is a hilarious twist on your usual fairytale, and I’d highly recommend it to anyone—children and adults alike. Get the entire box set, you won’t regret it.  I’d personally recommend it for anyone 3rd grade and up.