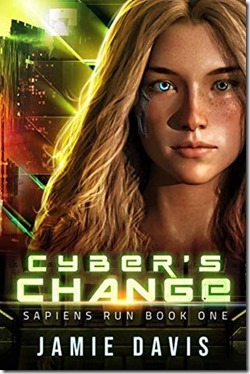 She was raised to fear them. But now she’s become her own worst enemy…

America, 2055. Cass is equal parts excited and nervous to leave her Sapiens Movement enclave. Stepping away from her technologically-conservative family for the first time, she sets off for college with dreams of saving humanity. But as the Sapiens girl falls for her cybernetically-enhanced roommate, her deeply programmed beliefs begin to glitch…

Confused in a world that no longer makes sense, Cass barely registers the horrific accident that leaves her near death. When she wakes up, she discovers the same technology she’s always hated is the only thing keeping her alive. No longer purely human, Cass questions everything she thought she knew about good and evil.

As tensions between man and machine head for a meltdown, Cass must choose a side before the conflict turns deadly…

There were some things about this book that I really liked, and then others, not so much. On the one hand, the writing was clear and easy to read. The narrative voice flowed well and there weren’t any noticeable typos. For the most part, I enjoyed the plot and characters – but that isn’t to say there weren’t flaws.

The romance between Shelby and Cass didn’t feel genuine or even like a romance at all. Although I applaud the author in being progressive, it felt more like a gimmick than anything real. In a way, it served to showcase that the major struggle of the plot was really just a thinly veiled approximation of the LGBTQ+ struggle vs. conservative extremists. It may have been switched out to technology vs. the anti-technology groups, but it was very much the same battle. Having Shelby and Cass’s relationship throw into that dichotomy just made it obvious in a way I’m not sure did the plot any favors.

Overall, the book was okay. There were parts I liked, parts that nearly lost my interest, and parts I wish had more depth. If you enjoy science fiction, you may enjoy this.

Jessica is excited about starting college in the fall, already enrolled at the University of Oregon. Every year for as long as she can remember, she has enjoyed spending a week camping with her father before school started, but this year is special because her best friends are coming with them. She has no way to know they will all be walking into a nightmare straight out of a horror movie.

Eighteen years before, Jessica’s mother died under mysterious circumstances right after giving birth to her. Her dad refuses to speak about it, though his eyes grow haunted every time the subject comes up. All Jessica knows is that it was a violent death. Her answers will come from a stranger, one who knows far more than he should.

Nethaniel is a Lycaeonian from the planet Laizahlia, a wolf shapeshifter. He is taking his first trip off world with his father when he runs across Jessica fly fishing at the lake. Though it shouldn’t be possible, he recognizes her immediately as his fated mate. Unfortunately, Nethaniel’s father has enemies, and three have followed them to Earth, vengeance on their minds. Jessica and her friends are considered little more than collateral damage.

A Warrior’s Nightmare by Denna Holm was a fresh twist on the usual werewolf/vampire genres that I’m used to, but not one I’m entirely sure I’m on board with. I actually wish that the author had departed even more from the traditional monster roles. There was an overly comfortable familiarity in the way the lore was put together that made it feel as if there was little effort put into separating the world-building from everything we’ve seen before. That being said, it wasn’t a bad story per se.

Other than a few mishaps with repeated phrases and some bad grammar, the story was well written. I liked most of the characters, even if they lacked some fleshing out. The plot was intriguing, I really enjoyed the descriptions of what it was like for the characters to be wolves… and overall, I just genuinely liked the story.

There were a few issues though. Perhaps because the characters lacked fleshing out, it very quickly became apparent that the antagonist of the story was your typical bad guy. He was evil and sadistic, and thought way more of himself than was reasonable… he wasn’t terribly compelling or interesting really, and he spent a lot of time monologuing as a narrator. I dare say that the first few chapters of the book were incredibly slow because the narration was bogged down by a lot of needless description about things like how to fly-fish, and chipmunks… that just weren’t relevant to the story. The antagonist even came complete with two henchmen – though it was never really explained why they were with him, nor why they listened to him.

Overall, it wasn’t a bad book, I liked it, but I think a lot of the author’s time was spent working on things that didn’t really matter in the grand context of the story, rather than taking that time to further develop the structure of the story, the relevant world-building, and the characters. 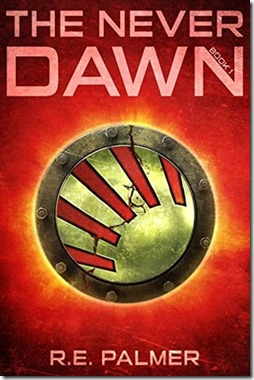 All his young life, Noah has longed to see the sky he’s only heard about in stories. For over one hundred years, Noah’s people have toiled deep beneath the Earth preparing for The New Dawn – the historic day when they will emerge to reclaim the land stolen by a ruthless enemy.

But when Rebekah, the girl of his forbidden desire, discovers a secret their leader has been so desperate to keep, Noah suspects something is wrong. Together, they escape and begin the long climb to the surface. But nothing could prepare them for what awaits outside.

The Never Dawn by R.E. Palmer was so much more than I ever expected. The writing was clear, concise, easy to follow, and flowed at an easy pace. There were quite a few typos in my copy, but I’m honestly not that upset about it. None of the errors were enough to jolt me out of the story.

The characters were interesting and at times, painfully naïve, but their naiveté is also what made them so fascinating. The world Noah and his dorm-mates inhabited was so well crafted, and the characters so well defined, that it was impossible not to get sucked into their monotonous life. There was a lot of mystery surrounding the Ark and the lives of the people there and it kept me reading.

In fact, I liked it so much that at the end of chapter 12, I put the book down and restarted reading the entire book with my 13-year-old daughter—and when we stopped reading at 50% so she could go to bed… I sneakily read the rest of the book on my own. I then read the second half of the book a second time with her the next day.

If you like post-apocalyptic, dystopian, YA, or mysteries, I would highly recommend you invest in this book. I can’t wait to continue with the series! My daughter lamented last night that she’ll probably never find a book as good as this one again—it has replaced her favorite book. I am blown away that this author has gone relatively unknown for the past four years. 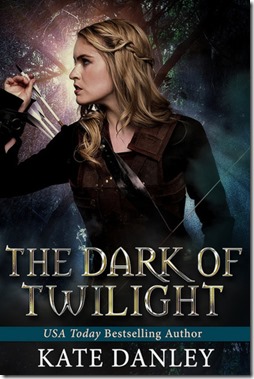 Aein always longed to be a member of Lord Arnkell’s army, ever since she was a child working in the stronghold’s kitchen. When that day finally comes and she is sent to patrol the border’s swamp with fellow warrior, Lars, it seems like her dream has come true. But something has followed her home. When Lord Arnkell’s wedding is interrupted by a werewolf attack, the dream shifts into a nightmare… and Aein is the only one awake.

First off: The cover is gorgeous. I tip my hat to the cover artist.

Technically speaking, this book is exceedingly well written. There were only two typos I found in the entire book (Pg. 54, Line 7 & Pg. 139, Line 28). The narrative was easy to read, flowed naturally, and had a quality of engagement that really attests to the author’s skill at writing. Despite the fact that this book geared to the YA/NA crowd, I never felt bored or talked down to, and none of the characters were overly whiney, dramatic, or angsty. I cannot emphasize how rare that is with a book of this age group these days.

The characters were equally well written. Aein was a strong female lead, even if she was relatively untested and a bit star-struck by the other characters around her. She stood up and fought when she needed to, and blended into the background when she didn’t. She wasn’t a fussy girl, and she wasn’t overly boy crazy despite the amount of eligible men running around the book. I couldn’t help but like her. Aein was a nice mix between a strong kick-ass heroine and a teen who was still trying to get her bearings in life. She made it easy to enjoy the story. Though there wasn’t a lot of depth to the characters other than Aein (who was always in the foreground, as she should be), the characters all had distinct personalities and blended well into the world building.

I only found two parts of this book hard to digest. The first, is the large amounts of time skips in the book. I’m not a fan of time skips. Don’t get me wrong… they weren’t that jarring. Despite the large chunks of time that went missing (particularly in the beginning of the book between Aein’s deployment to the swamp and her return), I didn’t feel like I was missing a huge chunk of her narrative.  In fact, the only reason I mention it is because it would have been nice to have had a little more time with the character that early on in the story, and I think it would have helped to solidify Aein and Lars’ deep friendship.

The second problem I had, and this is somewhat dependent on those missing bits of time, is the lack of heart-felt romance. There are two clear love-interests (okay three, but I refuse to count HIM) but there is very little romance to back up their relationships with Aein. When the relationship parts popped up, it felt like they were showing up out of the blue. I didn’t feel like Aein was particularly attracted to the two love interests, so when they suddenly were interested in her.. it was like “Whoa there buddy! Hands off!”

Otherwise, this was a great book. The world building was clear and well-constructed. The writing was engaging. The character weren’t annoying…and the plot itself was both clever and imaginative. I can’t say I’ve ever run into a werewolf-driven story like this one before. It was a joy to read. Would I read it again? Yes. Would I recommend it? Certainly. If you’re looking for a relatively quick read and you love stories filled with magic, werewolves and betrayal…. you’re probably going to really like this book.  If you’re looking to purchase this book for a teen, there is some gore but it is not described in such a way that would offend anyone, and the romance is clean. There’s no foul language. I feel perfectly comfortable handing this book to my 11 year old. Give it a shot.