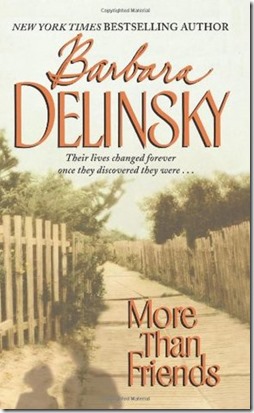 The Maxwells and the Popes have been friends forever. The women were college roommates, their husbands are partners in the same law firm, their kids have grown up next door to each other, and the two families share both vacations and holidays.

Like Wisteria Lane, the “perfect” suburban street of Desperate Housewives, all is beautiful and serene — until an accident forces these close neighbors to look beneath the surface. And when their idyllic lives are unexpectedly shattered by a moment that can never be erased or forgotten, their faith in one another — and in themselves — is put to the supreme test.

I had to stop and think a long time about what I was going to say about More Than Friends by Barbara Delinsky—a lot more time than I usually set aside to mull over a book. If you go into this book expecting to find a steamy, heartwarming romance… you aren’t going to find it. Classifying More Than Friends as a romance is a bit of a stretch. Yes, romance is a theme that runs throughout the book… but the book isn’t about romance. This is a story of heartbreak and tragedy… about what happens when people make more decisions that effect the lives of everyone around them. It’s about taking a hard look at your life and really deciding what you want it to be… not just taking the comfortable route. It’s also about betrayal, manipulation, and guilt. Conversely, it’s also about friendship, love, hope, and forgiveness.

Before we delve too deeply into the story of More Than Friends, let’s take a moment to talk about the technical: The book is incredibly well written. Barbara Delinsky has a way with characters that is sorely missed in a lot of the literature I read. Her characters are detailed and realistic, even fallible. Relationships are complex and at times, tenuous. The character’s voices, unique. The story was set up in such a way that I got sucked into the settings and situations without thinking twice. There were no grammar, punctuation, or spelling errors.

However, I’ll admit, the story was a little slow—and this is one of the main reasons I marked it down to 3 stars. As interesting and well written as the story was… it wasn’t terribly engaging. Sure, I cared about the characters. I wanted to see where the relationships would lead and if the problems would be resolved… but I wasn’t biting my nails, eagerly awaiting the next chapter. It’s not that the story was boring, but it lacked a sense of excitement that I’m used to in my usual book picks. I put the book down a handful of times. I didn’t throw it across the room. I didn’t wrinkle my nose and complain that nothing was happening… but I set it aside, sometimes for a day or two, and didn’t feel particularly swayed to pick it back up.

This was the second book I’ve read from this author, and both books I picked up from her just so happen to have similar themes… mostly concerning marriages in the midst of falling apart. Is this a running theme with her work? I don’t know. I haven’t read enough to say—but it isn’t my favorite theme for a romance novel. It lacked that high of a brand new relationship and the draw of steamy sex scenes that I’ve come to know and love in romance novels. Does that mean this was a bad book? No. It just wasn’t what I expected.

Overall, I didn’t love the book, but I didn’t hate it either. I think if I’d expected to have this sort of deep read I would have enjoyed it. I was looking for a giggle-worthy romance, and that isn’t what I found by any means. That doesn’t mean it was any less well written though. If you like drama-filled family saga’s, you’ll probably enjoy this book. If you’re looking for a fun romance book… you should probably look elsewhere. This one isn’t going to be for everyone, but I would certainly recommend the author to the right kind of audience. Her writing is excellent.