It was another day at the ranch, training horses and working fifteen hour days. And then the last person I ever expected showed up. Lake McCain: a Marine, tall, ripped—and the best friend of my dead fiancé. Cal died to save Lake, and now Lake claims that he carries a debt to me that he can never repay.

I wanted to brush him off. But then my mom, the manager of the ranch, went and hired him. We spend hours working together with the horses. Lake doesn’t say much. He’s layered and dark and he tries to seem shallow and simple. But he isn’t. There are things under his surface that matter. He works, quiet and strong, and never once lets me down.

Until he confesses that he may be falling in love with me. I can’t deny that there is something between us. But a relationship? I just can’t. I’ve used up all my chances at love. My past relationships have ended in death or disaster, and now I have to live with all of that.

I’m Riley James, and there are depths to Lake—depths to myself—that I don’t think I’ll ever fully understand.

Although this was an endearing, sweet romance, the style in which it was written made it a less than engaging read for me.

Technically speaking, the book was well written. It was grammatically correct, well punctuated, and with the exception of one glaring typo where a word was omitted, it was generally well edited overall. The problem for me lay in the flow of the narrative.

Riley’s voice was written in a very detached, often abruptly structured way that felt almost robotic at times. She lacked warmth and it made it hard to follow her point of view at times. I didn’t have a problem with her personality—on the contrary, I quite liked her—but still, it wasn’t always easy to follow her narrative, especially near the beginning and ending of the book.

Despite this flaw, I enjoyed the book for the most part. The characters, though not overly deep, were sweet and likeable. The setting was strong, and the romance seemed natural. I liked it. It wasn’t perfect—it lacked some of the engaging quality I’d expected, but it wasn’t a bad book. I’d recommend it as a light weekend read for anyone who might enjoy a contemporary romance between two broken protagonists. 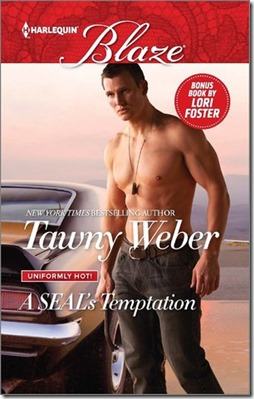 Lark Sommers’s dry spell is officially a sex-starved desert. Since taking over her mom’s quirky coffee shop in Nowhere, Idaho—putting her own career on permanent hold—Lark’s been, well, miserable. But her friends have a plan…one that starts with a superhot guy with a rockin’ hard bod.

US Navy SEAL Shane O’Brian has no clue he’s being set up. All he knows is that Lark does incredible things to his libido. Still, Shane can’t quite bring himself to tell her what he does for a living. After all, their risqué business is temporary—no strings, no falling in love. Especially when there’s no way this SEAL would ever be tempted into anything more than a sexy little fling…

I realize that formulaic romance isn’t everyone’s cup of tea. Personally, I think there’s something to be said for picking up an easy romantic read and enjoy over a relatively short period of time. Sure, more complex romances are great—but sometimes your brain just needs a break, and when those times happen, I have no qualms about picking up a sure-read romance like A SEAL’s Temptation by Tawny Weber.

Technically speaking, the writing was pretty spot-on. It was fast paced, well structured, and easy to sink into. There were a few relatively innocuous typos, but nothing that pulled me out of the story—and seeing as my copy was an ARC—I’m not going to complain about it too loudly. Having 2 or 3 typos in a full-length novel is fantastic compared to a lot of the editing I’ve seen.

As far as the plot and characters went, it wasn’t anything genre breaking. It was a formulaic romance where two people who weren’t really looking for love found it anyway. Lark was adorably artsy, and Shane was charming and sexy…. and at times a little naïve about love. Together, they made a really sweet, sexy couple that I was happy to while the hours away with. There was a lot of steam to this story—a welcome change to my reading lately, but without the raunchiness that sometimes associates some romance novels.

Overall I enjoyed it. It was nice to spend an afternoon sinking into a story without having to think too hard about the plot or the editing. Did it wow me and break the genre? No… but I enjoyed it, and I’m glad I read it. If you’re looking for a tidbit of juicy romance to enjoy over the weekend or a sunny afternoon, you wouldn’t go wrong to pick this up.

Piper Oliver knows she can’t trust him. They warned her that the tall, dark, and sexy black-ops soldier Jory Dean would try to win her over with his steel-gray eyes and deadly charm, but she won’t be conned by this man they call a traitor. All she has to do is figure out the science necessary to save his life, and she’s done. Something isn’t adding up, though, and she won’t rest until she uncovers the truth—even if it’s buried in his deep, dangerous kiss.

Jory will do anything to reunite with and save his brothers—even kidnap the gorgeous woman who’s working to deactivate the deadly chip in their spines. But the forces determined to destroy his family won’t let them go so easily. Keeping Piper alive is more than he bargained for—and so is his burning desire for her. But with every second brining him closer to certain death, can he afford to lose himself in her hot and willing embrace?

WARNING – SPOILERS MAY ENSUEB EYOND THIS POINT – REVIEW BELOW

I recently received an ARC of Total Surrender by Rebecca Zanetti in a Good Reads Giveaway—I’m a huge fan of romance, even formulaic romance, so it’s no surprise to anyone that I was looking forward to giving this book, and the Sin Brothers series a chance. Luckily, I wasn’t disappointed.

Now, I’ll admit, there were a few errors in the copy I received—I found three—but, keep in mind that my copy was an ARC (advanced reader copy) that probably wasn’t done with it’s final bout with the editor—so I hesitate to dock it any points. Overall, the writing was phenomenal. The sentence structure was well done, easy to read and follow, and concise. Not once did I stop and cringe at an awkward bit of wording or flowery language.

As for the characters: I fell madly in love with Piper and Jory as a couple. Sure, Jory could be domineering and arrogant, but it worked with his character and even when he was pushing Piper around it was obvious that he did so for her safety—not because he was just an ass. Piper was by far my favorite character. She was foul-mouthed and full of spunk (my favorite kind of heroine), and despite being no physical match for Jory, she held her own verbally.

The one major detractor from this book, unfortunately, was that it was very formulaic. It had your usual tropes of a domineering alpha male and the petite gorgeous woman who loved him. As with most sure-read romances (as I like to call them), the ending of the book was an idealized vision wrapped up in a neat little bow complete with a three-part epilogue where everyone was snuggling and talking about kids and marriage. If you don’t like happy ending romances, you may have a problem with this book.

Personally, I don’t have a problem with formulaic romances, and in all honesty, I sought this book out because it was one. Sure-read romances are the bread and butter of the romance genre, and one of my favorite types of books—it’s like curling up in a cozy chair with some hot cocoa and a box of chocolates. Even though I pretty much know how the book is going to end, that doesn’t lessen the appeal to me. Sometimes you want a cozy read.

That aside, the book is fantastic. The writing was exquisite, the characters were loveable, and the action and romance scenes were enough to set my heart racing. If you want a hot, fast-paced romance filled with gun fights, hacking ordeals, and sassy verbal wars, you’re going to enjoy this book. It isn’t going to be for everyone because like I said, it was a tad predictable, but that doesn’t make it any less of a good read. I’ll definitely be tracking down the other books in the series and more from this author in the future.