Title: Hers, Unleashed [Hers 3]

Silenian security guard Kaitlyn Bennett has won the proverbial lottery. A male hybrid matching all her fantasies has chosen her from thousands of other women. For three months, he will be her personal sex toy—a dream come true made possible by the planet’s new legislation.

Roth is in desperate need of a hideout, and becoming a sex pet on Silenia is the perfect way to disappear. All he has to do is entertain his beautiful human Mistress until his enemies give up the search—and be paid for the pleasure. What could go wrong?

As it turns out, a lot. The Traditionalists on Silenia have had enough of the new order, and Kaitlyn and Roth end up fighting side-by-side against the rising crime. Roth discovers he enjoys his new role, almost as much as he enjoys being the object of Kaitlyn’s desires…

But as Roth’s time on Silenia comes to an end he has to decide which he wants more: his money or the woman of his dreams. And when disaster strikes, is the bond between Kaitlyn and Roth strong enough to save Silenia, or will his secret be the end of them all…?

I always feel conflicted after reading Anna Adler’s work, and Hers, Unleashed was no exception. The whole infrastructure of treating sentient beings as pets doesn’t sit well with me even though they are being treated well. The similarities to slavery and the potential for abuse leaves me feeling skeeved out.

I like that the overwhelmingly unethical practices of the world were changed for this installment of the series. It was nice to see change being enacted.

Despite the afore-mentioned misgivings, the book was well-written. It flowed well and I didn’t run into any major typos or grammatical errors. The characters were interesting, and the sexual-tension between Roth and Kaitlyn was searing. Overall, I enjoyed the book… but I will caution that it isn’t going to appeal to every reader. It’s hard to get past the pet system, but if you can, it’s a fun read. 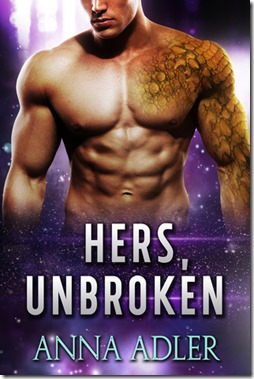 Title: Hers, Unbroken [Hers 2]

Ever since Chase heard about Silenia, he wanted to go there. A planet where human-alien hybrids such as him are kept as sex pets is the realization of his darkest fantasies. The only downside? He’ll be killed if he tries to escape, but Chase won’t let inconvenient little details get in his way. He lets himself get caught. Now, all he has to do is pass the pet training program and wait for a sexy female to buy him.

Holly is the head trainer in Silenia’s best pet training center. She hates her job. She secretly wants to set free all the enslaved aliens on Silenia, but she’s powerless to realize her dream. Meeting Chase turns her life upside down. All of a sudden she has an ally: a man who matches her deepest fantasies. But then Chase’s misbehavior marks him for death and the clock is ticking. Can the two of them change an entire world in 48 hours?

Alyssa Cressfield always wanted a pet—a big, sexy man who would look impressive on a leash. Now, she is finally ready to realize her dream. She visits a pet training center, intending to buy a trained pet. Instead she finds Jax, a fierce human-alien hybrid freshly caught from space, still untamed and unbroken. Alyssa has never encountered an untamed pet before. She can’t resist temptation; she must have him.

On Silenia, it is customary for humans to keep other intelligent species as pets and sex toys. Alyssa is kind at heart, but she is a product of her society and therefore sees nothing wrong with keeping a man in a cage against his will. Jax, on the other hand, is a space pirate who now finds himself wearing a collar and being treated like property. He has no intention of turning tame and obedient, and a battle of wills ensues. Jax and Alyssa quickly discover their undeniable chemistry, but is it enough to reconcile them? What happens when the pet breaks out of his cage?

Note to reader: This is a standalone novel featuring a romance between a human and a human-alien hybrid. While not dark, the story is set in a dystopian society and contains some raunchy sex scenes between the main characters. Recommended for mature readers.

That being said, I did have some gripes of my own. Although the level of kink and explicit sex in this book aren’t what I’m personally interested in, they don’t bother me. I read a lot of books, most of those falling squarely in the romance and erotica genres. What does bother me is the very clear association in this book with slavery and abuse. If this story took place in the real world, it wouldn’t be sexy—it’d be horrifying. There are many individuals in the book that are kidnapped, held against their will, mentally broken, and then forced to perform as pets for the wealthy. No matter how it’s justified in the book, it’s wrong. It’s hard for me to appreciate a book that relies on sex and romance to blind the reader to the fact that the main male lead has had his basic rights violated in this manner.

That being said, the book was well written. The romance was steamy, I adored the male lead as a character, and it had a happy ending. All of these are good things—but that doesn’t completely overshadow how intrinsically wrong the main premise of the story is. Even though I liked the book as a whole, I am very uncomfortable with the slavery aspect of its plotline. Because it’s fiction and everything worked out in the end, I’m willing to try to look past the less-than-savory aspects of the plot, but that doesn’t mean they don’t bother me. A lot of readers are not going to enjoy this book because of it.

Another thing I didn’t enjoy was the portrayal of the main female lead. Despite her purported intelligence and expertise, she came across as naïve, wanton, and rather airheaded. She was clever only when it served to thwart the main male lead, but refused to use her intellect to question her own society and their treatment of outside life forms. She questioned nothing that went against her own brainwashed utopian beliefs—and I find it hard to believe that someone so intelligent wouldn’t ask questions.

Overall, it was a fun read. There were definitely parts of the story I enjoyed and some I didn’t, but throughout, I was thoroughly entertained. This book isn’t for everyone. If you’re a sensitive reader, I’d recommend looking for something a bit more traditional, but if you enjoy a taste of the taboo, this is a safe way to be entertained for a few hours.