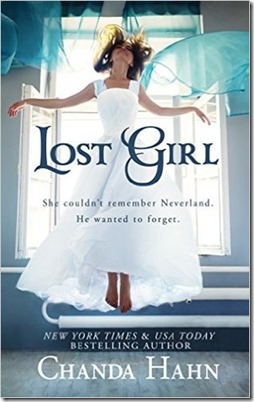 Wendy doesn’t remember anything about Neverland—or the experiments done on her there as a child. Seven years later, all she wants is a normal life, but shape-shifting shadows plague her dreams and turn her life into a waking nightmare. When the shadows attack at a football game and a boy disappears right in front of her, she realizes these wraith-like shadows are real. They’re not just haunting—they’re hunting.

A mysterious boy named Peter, his foul-mouthed sidekick, and a band of misfit boys intervene before Wendy faces a similar fate. But can they trust Wendy enough to take her to Neverwood Academy and reveal all of their hidden secrets when she’s hiding a secret of her own, or will the dreaded Red Skulls find her and drag her back to Neverland?

Lost Girl by Chanda Hahn was a familiar story with a science fiction twist that was both delightful and fast paced. The author did an excellent job of taking the well-known children’s story of Peter Pan and twisting it into a face-paced YA Thriller/Romance. There were themes of genetic manipulation, human testing, super-powers, and even a taste of the supernatural.

Technically speaking, the book was well written. At times the repetitive use of character names could come off as a bit overdone, but it was easy to understand why the author chose to do it. The style of the book was easy to follow and understand for teen readers without dumbing it down too much or over-hinting at any of the story twists. There were some surprising twists and turns to the story, and I found the characters complex enough to hold my interest despite their familiarity. The romance was expected, but intriguing once the unfamiliar character of Jax was introduced.

Overall, I enjoyed the story and would certainly consider moving on in the series. I’ll be interested in seeing how this series pans out. 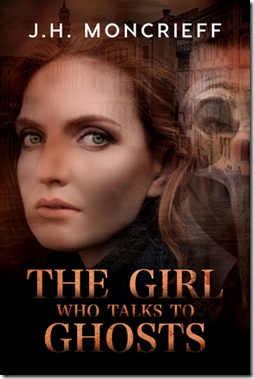 Title:  The Girl Who Talks to Ghosts [GhostWriters 2]

Would you risk everything to save a stranger?

Off the coast of Venice lurks Poveglia, the world’s most haunted isle, steeped in centuries of innocent blood. A deranged doctor who took great joy in torturing his patients in life continues to rule his abandoned asylum after death.

Few go to Poveglia willingly, but medium Kate Carlsson has no choice. It’s her job.

While struggling to retrieve a young girl’s soul, Kate uncovers some shocking truths about the evil on the island that challenges her own convictions and morals—and even her life.

Is saving Lily worth making a deal with the infamous Doctor of Death, or is the price too high to pay?

It took me awhile to decide how I was going to rate The Girl Who Talks to Ghosts by J.H. Moncrieff—the second book in the GhostWriters series. I honestly can’t decide if I liked it more than the first book or not. Personally, the ghost story and surrounding aspects of the plotline were a lot more interesting for me than those of the first book. I liked Lily’s POV as well as Kate’s much better than I liked Jackson’s (even though I didn’t know it at the time). It was fun following Kate around as she delved further into the paranormal than the author had been willing to in the first book.

Unfortunately, not all was hugs and puppies. I think an unfortunate consequence of Kate and Lily’s POVs being so interesting, was that Jackson fell a bit by the wayside. He was definitely more of a supporting character in this story, and honestly, kind of a useless one. He seemed to be around mostly to illustrate his ignorance about the paranormal, and to fail at being diplomatic. I don’t think he was necessarily as integral to the plot as he was intended to be, and so his character fell a bit flat.

As a smaller note, there were also a few plot holes. Most were minor, and they didn’t detract from my enjoyment of the story as a whole, so I’ll leave it at that.  If you’re looking for a solid paranormal ghost story, I highly recommend you check out this author and the various books in this series.