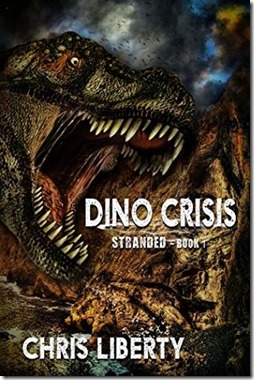 A group of researchers led by Dr. Emmanuel Hernandez gains a permit to visit the quarantined Ilha da Morte to prove either the truth or the fallacy of the whispered rumors of a giant lizard that lurks within the dark, unexplored jungles.

One problem after another plagues their mission, starting with their boat sinking during the landing, followed immediately by the loss of their satellite phone and the death of a team member. The expedition, now cut off from the world, takes a more dangerous turn when hooting and roaring in the night reveals not only that the animal they seek is real, but that there’s more than one.

And they come closer each night.

The creatures soon prove to be the least of the team’s problems after encountering another group intent on keeping the island–and everything on it–secret from the rest of the world, even if they have to kill to accomplish it.

I desperately wanted to like this book. You simply can’t understand how much I love dinosaurs… but at 4% into Dino Crisis by Chris Liberty, I was ready to give up.

The narrative was dripping with over-done description that made it seem overly dramatic. Each sentence was complex to the point of making it seem as if the author was trying their best to fit as many descriptors as possible into each line. It wasn’t subtle. The absolute worst of which, was the character introductions, which floundered in during an actin-packed escape from a sinking boat, ruining the pace. The author dragged the reader through introduction after introduction, each complete with name, occupation, a description of their hair (which seemed to always include how said hair defied the weather in some manner) and then a litany of physical description. It was so tedious and obvious that it was physically painful to read.

So, I gave up. I wish I could say more about this book – but I simply couldn’t get past the rudimentary writing. This book is badly in need of an editor. Maybe the story is fantastic, maybe the characters are full of depth and well-spoken… but if your writing makes it impossible to sink into the story and get to those things, something is wrong, and it needs to be addressed.