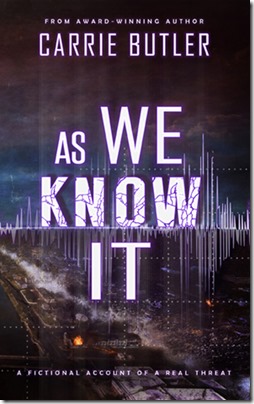 Title: As We Know It

Deep beneath the ocean, stretching hundreds of miles alongside the Pacific Northwest coastline, lies the Cascadia subduction zone—a fault on the verge of unleashing a catastrophic earthquake, thirty times more powerful than the San Andreas. Unfortunately, like most tourists, Elena Cordova is oblivious.

She’s got her own pent-up stress to deal with, a humiliating breakup that’s driven her to end her tenure as a human doormat once and for all. So, when a pickpocket makes off with the last remnant of her relationship, she takes action—only to get trapped with him when disaster strikes.

Now, if either one hopes to survive, they’ll have to get past their initial impressions and work together . . . because in fifteen minutes, half the town will be underwater.

What a fantastic read. Honestly. I’ll admit, I was a little thrown off by how this book began. I opened it up, and for a few short minutes, I sank into what felt every bit to be a contemporary romance. I forgot for a moment that the cover looked apocalyptic, and then BOOM, everything changed—much like, I imagine, it changed for Elena and Vincent.

As We Know It by Carrie Butler was a gripping survival tale that I felt, portrayed a natural disaster situation in a reasonably accurate light. The situation felt not only real, but plausible every step of the way, and I was sucked into the harrowing world of Elena and Vincent for a few hours. The book was wonderfully well written. I only found a couple of typos, and nothing jarring enough to pull me out of the story. The characters were complex and imperfect, but genuine. The romance was surprisingly sweet, and the banter between the two lead characters was compelling and dynamic.

I honestly don’t have anything to complain about with this book. I absolutely adored it. It was tense, gritty, believable, and heartwarming all at once. If you’re looking for a gripping adventure story, look no further.