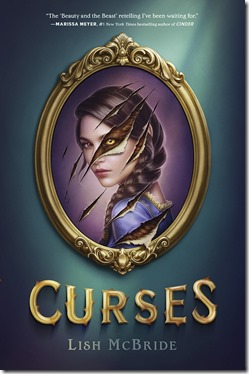 Merit Cravan refused to fulfill her obligation to marry a prince, leading to a fairy godling’s curse. She will be forced to live as a beast forever, unless she agrees to marry a man of her mother’s choosing before her eighteenth birthday.

Tevin Dumont has always been a pawn in his family’s cons. The prettiest boy in a big family, his job is to tempt naïve rich girls to abandon their engagements, unless their parents agree to pay him off. But after his mother runs afoul of the beast, she decides to trade Tevin for her own freedom.

Now, Tevin and Merit have agreed that he can pay off his mother’s debt by using his con-artist skills to help Merit find the best match . . . but what if the best match is Tevin himself?

I’ll be honest, I very nearly gave Curses by Lish McBride, 3 stars rather than 4. Part of that was my own preference – I’m not into comedy and silly hijinks. The other part, is because I feel this book just wasn’t categorized right… or to be more precise, it didn’t fit into any given category just right.

Although the book is labeled Young Adult, it doesn’t quite fit what you’d expect to find in a young adult novel. Yes, the characters are about that age range, but because of the historical-leaning context of the society they live in, they aren’t really teens as we know them. Tevin is the eldest son in his family and carries the weight of the safety of his siblings on his shoulders. Merit is entrenched in trying to find a husband. Combined with some of the darker themes in the book, you could easily place this book squarely into the New Adult, or Adult category, and no one would blink an eye.

All of that, however, is belied by the writing style. Despite the more adult themes and the young adult characters themselves, the book is written more like a children’s book. Part of that is the humor and hijinks, some of it is the over-the-top comedic world-building, and a lot of it rests squarely on how the narrative itself is written. Don’t get me wrong – it isn’t badly written: the pace is quick, the writing is clear, and it’s easy to sink into the story – it just doesn’t sound like a Young Adult book. When I first started reading, this really threw me. I nearly set the book down.

The characters’ actions, the way they spoke at times, and the events of the plot were overdramatic and fantastical like you’d find in a children’s book or a middle-grade story. I mean, one of the characters gets turned into an ostrich for three months. These aren’t bad things per se, but they weren’t what I was expecting, and they certainly weren’t hinted at in the synopsis or cover.

In the end, I actually did end up liking the book even if it wasn’t what I thought I was getting into, or even what I was looking to read. I liked the characters, I liked the plot, and the world-building – although I’ll admit, I almost docked it a point for the curses support group – because that was giving me some serious Cursed Princess Club comic vibes, and it felt icky to see it being used in so similar a way. If you like fairy tale retellings that don’t take themselves too seriously, you might really like this book… just know what you’re getting into. Don’t expect a serious YA Fantasy Romance. Expect a middle-grade fantasy with fairy nobility, ostrich’s crashing weddings, and beasts that wear sundresses and smash teacups, and you’ll be all right.