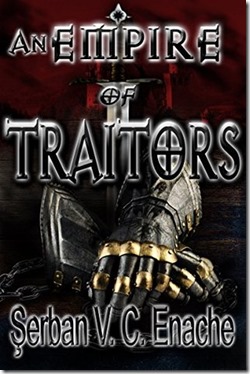 Title: An Empire of Traitors [Of Hate And Laughter 1]

Flesh will bleed. Bones will break. Swords will turn.
An Empire Of Traitors follows several principal storylines simultaneously. It’s been eight years since the end of the civil war between the Inquisition and emperor Zygar Ferus, worshiper of blood gods – and in the five realms of the Empire things are stirring. Driven by ambition or wounded pride, many nobles like the dog-headed serpent of Stoneweed seek to change their fortunes, even with the price of treachery. And from exile, from the heathen nations of the Lowlands, a Sunborn scion of house Mero gathers strength behind his claim. No family, great or small, shall remain indifferent to fate’s whim. It takes an emperor to rule an empire, but it takes numbers and honored oaths to keep both crown and throne.

In the Westlands, Drakanes, a sister of the Temple finds herself in the role of juror, of passing judgement on a man accused of murder, who claims to have been possessed. The trial’s proceedings enlighten her as to the truth of it all, and the good sister is willing to, out of pure stubbornness, risk death for justice.

Emperor Hagyai Rovines Mero fears for the continuation of his line, and sends Sycarus on an errand to the Desertlands to bring back an Aharo maiden for his son and heir. Hagyai Rovines desires a betrothal between the prince heir and a savage girl – trying to emulate a long dead custom of the Sunborn emperors. Such a move is most unpopular, and the whispers of another civil war are once again in the air.

Birus Mandon, lord of Rivermark and warden of the Streamlands, is warned of a plot against his sovereign and tries to gather knowledge on the schemes of potential oathbreakers, though his trade is not that of a spy. When he hires the Mounted Arrows Company of Narak al Zull, Birus learns more than mere outlandish tactics; he finds a new source of strength in the heathen company’s warrior god Allahr.

Kalafar Sodomis, lord of Weiyenor and warden of the Northlands, has seen his brother get married, and he himself is tried by notions of passion toward a certain lady of a southern house. But as the conflict breaks out, Kalafar needs to act as a proper lord and assert authority. He summons his vassals for a council at Devil Mound to decide if the north will go to war.

I honestly almost just trashed this book without leaving a review at all – which is something I don’t do. Ever. However, I am a firm believer that if you read a book, and something is wrong with it, you should let other readers know – so they don’t waste their time, and the author, hopefully, can learn to be a better writer. So here I am.

There’s not a lot I can say about An Empire of Traitors by Serban V. C. Enache. The cover art is, well, kind of terrible. It looks like someone with very little knowledge in design decided to slap together a cover in photoshop – mostly out of clipped art and a text tool. I’m fairly certain that’s exactly how it was put together.

And I’ll be frank – I only read the prologue and the first couple of pages of the first chapter. Then, I stopped. I could be kind, and say that the book reads like high literature. It wouldn’t be a lie – but it wouldn’t be entirely truthful either. The narrative was written like someone dearly loved a thesaurus. It tries so hard to be poetic and pretentious that it becomes an absolute chore to untangle and read.

Maybe the plot is fantastic. Maybe the characters are written well, maybe there’s a heartbreaking story in there somewhere… but I am of the personal opinion that first and foremost, a book should be engaging and flow naturally. It should draw you in until four hours later you look up from the last page and remember that you forgot to eat lunch. You shouldn’t have to force yourself to read something – and I don’t see how that could be the case with this book. I had trouble forcing myself to read past the first two sentences.

I can’t speak for anyone else, but this book wasn’t for me. I don’t think it will be an easy read for the majority of readers, so before you buy it, read an excerpt. Know what you’re going into.