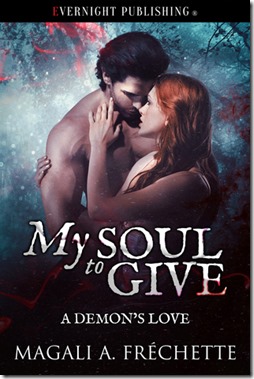 When Celina Leviet escapes the brutal home invasion that kills her husband, she’s left with a bullet in her gut and vengeance in her heart. An alluring demon, Mekaisto, offers an irresistible deal—in exchange for her soul, he’ll let her live long enough to get her revenge, but she must hunt and kill the murderers herself.

After sealing the contract, Celina digs into her husband’s past for clues about his murder, and what she uncovers makes her question everything she thought she knew about him.

His family history was a lie.

And he was involved with The Lumen, a shadowy religious order whose members know too much about demons. As the life she thought she knew crumbles around her, Mekaisto’s charms become harder to resist. Forced to face a horrible truth, Celina struggles against her late husband’s betrayal and the dark seduction of the devil she knows.

I’ll admit it. I have a thing about demons in my romance fiction—I love the danger of the forbidden relationship they represent, and the tension in trying to figure out if they can truly be trusted at their word… so it should be no surprise that I enjoyed My Soul To Give by Magali A. Frechette. There was certainly an aspect of danger and the forbidden to its characters and plotline, even crossing over the line a little too far at times. This was definitely not your conventional romance.

The characters were interesting, complex, and compelling. Their romance was steamy, a bit taboo, and sweet at the same time. The mystery and aspects of the murder plotline kept the story jaunting along, and I couldn’t help but get sucked into the narrative.

I don’t think this story is going to work for everyone though. There are definitely a lot of questionable aspects of the characters and plot that aren’t going to sit well with some readers, especially those who are firmly religious. If you’re one of those people, this book is not going to be for you—and it’s not meant to be.

If you’re into dark fantasy, I highly recommend you pick this one up. It was certainly a captivating read, and the ending was one I didn’t see coming!