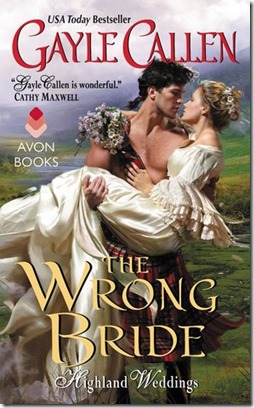 Shaken from sleep during the night and bundled off to the Highlands by a burly Scot, Riona is at first terrified, then livid. Hugh McCallum insists they were promised to each other as children to ensure peace between their clans. The stubborn laird refuses to believe he’s kidnapped the wrong Catriona Duff. Instead, he embarks on a campaign of slow-burning seduction.

At first, Hugh cares only what their marriage can do for his people. Now he’s starting to crave Riona for her own sake, but her true identity jeopardizes his clan’s contract. And unless she chooses to risk all to be his bride, he’ll lose the only thing he prizes more than the lands he’s fought so hard to save—the passionate marriage they could have together.

I received The Wrong Bride by Gayle Callen via a Goodreads Giveaway, and as someone who adores historical romance as a genre, I was excited to delve into the book right away. Luckily, I wasn’t disappointed. Though the book was what some might consider a formulaic romance, where a love-hate relationship between the main couple spurs on the majority of the story, and everything, of course, ends with a happy ending—that didn’t diminish my appreciation for the book.

Technically speaking, the book was well written. I ran into one typo (a missed word) somewhere near the end of the book, but other than that, the editing was flawless. The characters made reasonable decisions, had believable dialogue, and the narrative flowed smoothly. I was engaged in the story from the very first paragraph. Enraptured by the sometimes hilarious and tension-filled relationship of Riona and Hugh, I quickly fell in love with the characters and was pulled back into the book time and time again each time I set it down to do something else (like laundry. A girl’s gotta live!)

Ultimately, I don’t have anything to complain about. I enjoyed the book, and though formulaic romance isn’t everyone’s cup of tea, I wouldn’t hesitate to recommend it to anyone out there that does enjoy the genre.