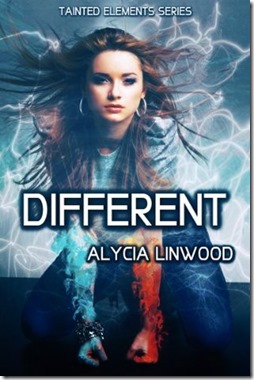 Eighteen-year-old Moira, an air elemental, never thought that waking up with an unusual blue fire on her arm would turn her life upside down. Determined to figure out why she has an element she shouldn’t have, her parents take her to a secluded island to keep her safe from anyone who might want to experiment on her. There she meets Noah, a boy who seems to know a lot about her elements. As he introduces her to a group of a new kind of elementals who are more powerful than anyone could have imagined, she doesn’t know if she can trust them, especially because the group’s leader, Jaiden, has an extremely dangerous ability. But when her parents get kidnapped by a mysterious man, she has no choice but to turn to Noah and Jaiden for help.

It was hard for me to settle on a rating for Different by Alycia Linwood. The plot was interesting, the characters engaging, and the hint of romance had me shipping some pretty crazy couples… but the book had some pretty major flaws despite all its positive qualities.

The pacing was ridiculously fast. One minute the main characters was meeting a group of strange teens she didn’t trust, the next she was giving them hugs. At times, the book became confusing because of how fat the plot was moving, and it almost seemed as if the story started mid-book. So much information was being doled out so quickly that before I even had time to breathe, the plot was in full swing. By the time the book was at the midway point, it felt as if it should have been over.

To make matters worse, and maybe because the pace was so quick, the characters actions and the authors choices didn’t always make sense. At one point, the main character faked a bar fight to get some bad guys to show up at a specific location, and immediately after she feigned confusion that reports were coming in of the bad guys searching bars. Stranger yet, it turned out that one of her friends was doing exactly what she had pretended he was up to in order to lure the bad guys in—he was causing trouble in a bar only two blocks away! It felt at times as if the author hadn’t planned the story out well, and the coincidences just weren’t believable. Things that should have been important were resolved easily, and relationships jumped ahead quickly. I had a hard time appreciating the story.

Does that mean I didn’t like the story? No. I liked the world building (what little there was0. I liked the characters, even the hint of romance. I think the book just suffered from a case of bad execution. I wish the author had spent a little more time fleshing things out and plotting things through.

This book isn’t going to be for people who like incredibly detailed and well-plotted stories, but if you want a quick paced YA with magic and it’s fair share of drama, you may appreciate it, as I did.