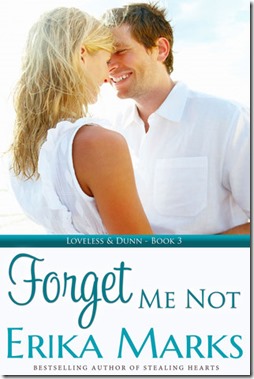 Title: Forget Me Not [Loveless and Dunn 3]

When aspiring-writer Mallory Reynolds packed up for New York City, she ditched more than her quiet hometown of Magnolia Bay—she left her high-school sweetheart, Josh Loveless, behind. But when the big city didn’t deliver big contracts on her novels, she turned to writing erotica under the pen name Farrah Ivory to spare her family any embarrassment. Soon, her scandalously-sexy series, The Lost Diaries of Scarlet, is a break-out hit. Just as Mallory begins to enjoy her sweet success, her publisher leaks her true identity and a media firestorm ensues. Exposed, she decides there’s nowhere to hide—except for home.

For Josh Loveless, getting over Mallory Reynolds hasn’t been easy, but he’s done his best to move on. For starters, he’s turned his love of the outdoors and rock-climbing into his own business. And just as things are starting to settle for him, he learns Mallory’s coming home to ride out her scandal, and suddenly his world is turned upside down again…

Can Mallory convince her friends and family that she’s still the same good-hearted girl they knew? And more importantly, can Josh trust the woman she’s become, and give her a second chance to rewrite their love story with a happy ending?

I sincerely enjoyed Forget Me Not by Erika Marks—in fact, I’m somewhat disappointed that I couldn’t give it a full five stars. I very nearly did, right up until the very end of the book… but we’ll get into that in a moment.

Technically speaking, the writing was exceedingly well done. There weren’t any typos, awkward sentences, or narrative blunders. The story moved along at a pleasant pace, and the characters felt well fleshed out—even the one-off characters that only appeared for a scene or two.

The only real negative that stuck out to me with Forget Me Not, and the main reason I marked it down to 4 stars rather than 5, was the ending. It felt… rushed, I guess is the word I’m looking for. The story had a nice, slow lead up as the characters began to try and untangle the mess of their relationship and figure out where they stood with one another, and then in what seemed like a split second, everything was resolved. I think I would have still given it five stars, except at that point, the book felt finished… but instead of ending, the story continued on for a few more minutes past that point. It’s hard to explain, and though I can’t tell you how much I appreciate the fact that the romance didn’t end with your typical marriage, engagement, or pregnancy announcement, it felt… wrong for the story to end mid-start into another scene. It felt as if the story should have ended just a bit earlier.

Overall, I really enjoyed the book. Had it not been for the odd structure of the ending, I wouldn’t have anything to complain about. If you’re looking for a nice, clean, and endearing contemporary romance, this is going to be perfect for you. If you’re looking for something a little more steamy… you may want to keep looking. Mallory’s fictional erotica novel contained more naughtiness than Forget Me Not—but it was still a good, solid read.

One thought on “Book Review: Forget Me Not”