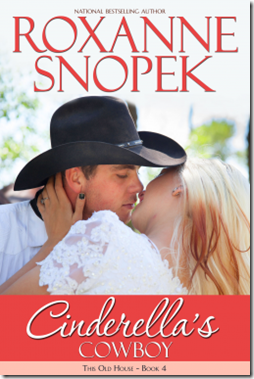 Chad Anders doesn’t know why mousy Cynthia Henley trips all over her tongue when she’s around him. Nor does he understand his undeniable attraction to this good girl. Wild and sexy is his type, like the dream-girl he caught a glimpse of years earlier he’s never forgotten.

Cynthia’s superpower is invisibility, especially with men. It’s better for everyone that way. Besides, she’s got a cat. She’s okay. But when playboy-rancher Chad hires her, she’s got a chance to shine. Professionally, at least. Until she learns of his fascination with a mysterious dream-girl, who was actually nothing more than a shy teenager on an ill-advised dare all those years ago. Cynthia knows she’s no man’s dream-girl and never will be.

But there’s magic at the ball. Princesses glow in the starlight, princes appear out of nowhere, and, sometimes, they look a lot like cowboys…

Cinderella’s Cowboy by Roxanne Snopek hooked me from the very beginning and didn’t let up for three hours (that’s approximately how long it took me to finish this book from cover to cover in one sitting). Right away Cynthia’s humor and self-deprecating snark drew me in. I was barely off the first page before I was grinning—it was a great start to a fantastic book.

Technically speaking, like all of Ms. Snopek’s books, the writing was impeccable. I read an ARC obtained through NetGalley, so there were a few bumps and bruises at the beginning—mostly dealing with curiously absent hyphens mid-strungtogether-phrases (see what I did there?) and one or two fragment sentences, but nothing so big as to pull me out of the story. The narrative moved along at a quick pace and flowed seamlessly from the first word to the last.

I adored the characters especially. Cynthia was a no-nonsense sort of woman with a snarky sense of humor and just enough anxiety to make her downright adorable. In contrast, Chad was an all-too-sure-of-himself cowboy with a sexy swagger and charm dripping from his pecs. The two really couldn’t have been any more different, and yet, they worked. Cynthia threw Chad off balance in a way that brought him back down to earth. They were good for each other, and I loved the understated chemistry between the couple.

There were definitely some undertones of the original Cinderella story running through the book, but it wasn’t so blatant to call this an alternate version of the fairytale… more like a tip of the hat in that direction. It was fun to see the similarities between the two stories, but also the contrasts. Though let me tell you… the stepsisters were by far not my favorite people… maybe it’s because I have a little Cynthia in me, but I loathe people who are shallow and irresponsible—and boy those girls got under my skin!

Overall, I really enjoyed the story. My only wish is that the story had been a little longer. I sped through Cinderella’s Cowboy like it was an 8-second bull ride, and when it was over I desperately wanted more. I hesitate to say that I’d probably have loved the story more had the romance between Cynthia and Chad dragged on a little longer and been a little more steamy—but that’s mostly a personal preference.

If you’re looking into getting this book be aware that it can stand alone, but it’s better if you read it along with the series. There are numerous mentions of characters from previous books, and if you haven’t read them, these characters may come off rather 1-dimensional. Their stories weren’t necessarily delved into in this book, and they really weren’t meant to be (because they do have their own stories). If you read this book having missed the previous stories, you’ll probably still enjoy it, but maybe not to the degree that you could.

I urge you to pick up this book if you like contemporary romances filled with humor, clean romance, and sexy cowboys—you’re going to like this. It’s a quick read, and perfect to enjoy over a rainy weekend.