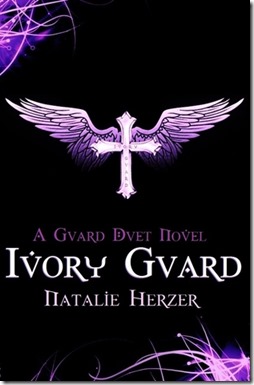 One peaceful afternoon Lillian finds two angels in her living room – wings and gloriole and all – telling her she is an Ivory. Half human and half angel she is born to fight for humankind and to guard the hellholes where the membrane between worlds is at its weakest.
She, an important warrior? Yeah, riiiight.

Raz might be an angel but he doesn’t do compassion. His job is to train her, to make her a leader and that’s what he will do. So Lillian will just have to suck it up when she discovers the deadly truth behind his words. When she does exactly that, he has to admit there’s more to the bookworm than he thought. Much more. But there’s one thing he shouldn’t forget – in his world feelings come with a price. Is he willing to pay?

I got a hold of this book by sheer luck—literally, I won it in a giveaway—and boy am I glad. Ivory Guard was a fantastic read by the very creative Natalie Herzer. At it’s core the story is a battle between good and evil, and the gray area that inevitably falls in between. It is the story of Lillian, a young woman who one day discovers that she is half-angel. She is quickly recruited into the Ivory Guard, a group of half-angels that defend the souls of the Earth from demons that spill out of hell and onto our plane from hellholes scattered around the world, and adventure ensues. If anything, it is a lesson that the world isn’t black and white, but shades of gray. Sometimes Demons aren’t evil, and sometimes Angels aren’t good.

The narrative of Ivory Guard was engaging, fast paced, and filled with snarky character-driven comments that kept me smiling throughout. There were moments of danger and tension, moments of steamy romance, and heart-breaking sadness. There was friendship, love, and betrayal. I honestly can’t imagine this story having been written any better than it was.

As for the characters, I loved them all—even the evil ones. The author had a way of making her characters seem not only believable, but real. I wanted them to succeed (except maybe Micah). The cast was small, but very personal, and it was fun to get to know the different personalities of the characters as the story unfolded. Lillian was both strong, stubborn, quick-witted, and intelligent. She didn’t whine or throw herself into danger—she was what every heroine should be. Likewise, Raz, though a bit broody, was a nice change from your usual angelic character. He wasn’t perfect and didn’t seem alien (as most books tend to Make angels seem). He was a very real character with wants and desires despite his divine origin, and it was nice to see the story delve into the gray areas of his relationship with Lillian.

The lore/world building was fascinating. I’m glad it didn’t step too far into being super-religious. This wasn’t about religion. It was about the battle between good and evil and the gray areas that lay in between. It was about defining what was right and wrong, and what a person would do if suddenly the line between them wasn’t so clear. The characters didn’t operate on blind faith. They questioned and made up their own minds—and I think that’s why this story worked so well. We all struggle through life trying to understand and follow our moral compasses, and sometimes part of that process is figuring out how far we should push the line between the two. I think it’s something any reader can relate to.

The only drawback of this story, unfortunately, was the technical aspect. Though the story was engaging, the narrative had some definite problems with structure. Throughout the book I found dozens of misspelled words, incorrect words, missing punctuation, and strangely structured sentences that at times, made it hard to grasp the meaning of what I was reading. I really wish a good editor could have given the book a look-over before it was published, because it was distracting. It didn’t break the story for me though. Once I got used to skimming over the sometimes convoluted sentences or miss-used words, the story kept me quite entertained. Though the errors were frequent, they weren’t obtrusive enough to have me put down the book.

Overall, I really enjoyed the book. Had it not been for the multitude of editing problems, I would have given it an easy five stars. I’d definitely read it again. Would I recommend it? Yes. Ignore the errors, the story is worth it. Anyone who enjoys YA, New Adult, Paranormal, Fantasy, or Romance will like this book, and I strongly recommend you give it a try. My only advice to the author is that the next time around, they invest in a professional editor because whomever edited my copy missed a lot of blatant problems.