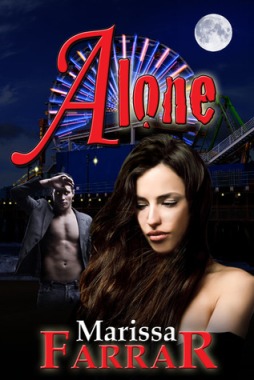 Description/Synopsis: Caught in a violent and abusive relationship, Serenity thinks there is no escape. Then she meets a stranger, Sebastian, who shows her the possibility of a different future.
Only Sebastian has a dark secret; he is a vampire.

As Serenity’s life takes a terrifying turn, she finds herself drawn into a world she never knew existed; one of murder, love, and immortality. She is forced to confront her own weaknesses to save both her own life and that of the vampire she has come to love. But in the end all that matters is; can she find the strength to be Alone ?

So let’s start with the cover: It was done quite well. The text isn’t obtrusive, the images are relevant to the story. *thumbs up* The lighting may be a bit off, making it obvious that it was a cut-and-paste job, but even considering that, it was pretty well done. Someone knew what they were doing when they pieced it together.

As for the plot… I have deep seated issues with it. I think a story about a girl who’s abused who gets help from outside forces, even a love interest, isn’t a bad idea. In fact, done well, it would make an excellent story. By the same token, a Vampire falling in love with someone who clearly needs help in their life… not a bad idea–but a vampire trying to rescue a girl from an abusive relationship? That’s where we’re getting a little too far over the border for me. I guess it’s the basic idea behind it that bothers me. Someone who’s in an abusive relationship is going to find it very hard to leave, that’s just how these things work (whether it makes sense to the rest of us or not). I’m not an expert (though I have been in an abusive situation before) but I think for the most part this trickles down to three explanations:

1) Fear. They’re afraid they won’t get away, and what will happen if they fail and are caught.

2) Love. For whatever reason, they really do love the person abusing them, and despite what is happening to them, they don’t want to leave. There is still hope that the person will change and things will go back to how they used to be.

3) Dependency. For some people it’s nearly impossible to leave because they have no way to get away. They may not have a job, or a home to go to if they leave. Bank accounts are tangled, they may have a disability, or there may be children involved… for whatever reason, this can make someone unwilling to leave.

This boils down to a very difficult decision when someone does choose to leave an abusive relationship. It’s a scary prospect. Even if the rest of us say “i’d never stay if someone did that to me” the reality of the situation is that it isn’t so clear cut.

Oddly, in this story, Serenity doesn’t seem to have a good reason to stay. She doesn’t particularly love her husband. She is the independent party of the couple (she has a job, he doesn’t), and her husband already lets her leave the house to go to work/shopping etc.  Getting away wouldn’t be that difficult. I honestly don’t know what the author was thinking when she made Serenity as independent as she did, and that’s part of why I found her situation so unbelievable. It didn’t feel like she was in a difficult position… just that she was too stupid to do anything about it, and that made me angry. If you’re going to write about abuse, at least write it convincingly, to do otherwise is almost an insult; it seems as if you’re throwing in an abusive relationship just for drama purposes, and the misuse of such a touchy subject is bound to make some readers (like me) very angry.

The abuse aside, I had a difficult time believing in the romance between Serenity and Sebastian. I think Serenity was drawn to him mostly because she was desperate (though the author tried to pawn it off as sexual attraction). Sebastian on the other hand spent most of the story narrating how he couldn’t ever have a relationship with Serenity because he was a vampire and he didn’t want her to be one… yet he was super attracted to her. Why? I don’t know. She was helpless and none too bright if you ask me. I really didn’t see anything about her that made her stand out from the crowd to a supernatural being. It gave the story this vibe of “I want you to wonder if they’re going to get together… but you really know it’s never going to happen.” There wasn’t enough between the couple to make me earnestly feel they were headed towards a relationship, and so the few scenes there were between them felt misplaced and fake. In the end, I didn’t want them to get together, and as a consequence, the whole thing seemed forced.

Unfortunately, there were also -other- love interests involved: A police officer that seemed mostly irrelevant to the story who was obviously in puppy-love with serenity (and spoiler: she ends up dating him in the end despite the fact she wasn’t all that attracted to him), and also,  the vampire who made Sebastian into what he is,  and is jealous of Serenity and wants him to herself. Again, she seemed mostly irrelevant to the story other than to provide yet another reason the two couldn’t be together.

In the end I couldn’t like the characters because I didn’t feel a connection to them. I didn’t understand their wishy-washy relationship or the ill-plotted reasons behind why they were together. It just didn’t make sense to me. This book made me angry because it wasn’t convincing. It was a story–a story that seemed to use dramatic quirks (vampires, abuse, the random and irrelevant sire-vampire, and goody-two-shoes cop in puppy love) to try and raise the tension, but instead, it just made it a jumbled mess of tropes. I didn’t enjoy it, and though I did finish the book, I don’t think I’d recommend it. It’s free right now on Amazon, so feel free to go give it a look, but honestly, it just wasn’t a good story.